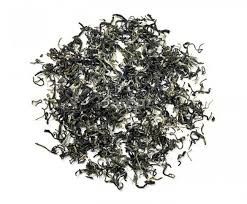 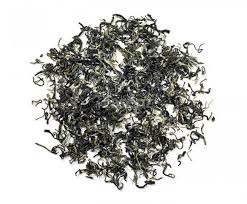 Bi luochun green tea is one of the 10 famous Chinese teas. Bi luochun is produced in Dongting mountains, Taihu Lake, Wuxian, Jiangsu. Bi luochun is always known in China by the saying "one tender three fresh".

This phrase means the bud is very tender, the color is bright, the taste is mellow, while aroma is strong. Bi luochun which is produced in Dongting, the strips are slimy and in the shape like spiral, and its full of cilia. White tips are exposed while the rest looks aquamarine bearing a strong aroma. After it is brewed the bi luochun will stay on the bottom of the cup, while it has a bright olive color.

Bi luochun does not have a fermentation process, so it keeps the natural antioxidants and vitamins that are found in tea. Bi luochun has many health care benefits for those old and young.

History and Origin of Name

While Dong Ting Mountain is an old tea producing area dating back to the Tang Dynasty (619-907), Bi Luo Chun become very popular during the Ming Dynasty (1368-1644) and later a Tribute Tea during the Qing Dynasty (1644-1911). There are many stories about how this tea was named, but the important characteristics are the deep green color (Bi), the curled dried tea shape similar to a snail (Luo). In addition, this green tea must be harvested during the early spring (Chun), which results in its white feathery appearance.

There are five main fresh water lakes in China, the 3rd biggest being Tai Hu (Tai Lake) in Jiangsu Province. Within and around the lake is Dong Ting Mountain where Bi Luo Chun originates. Dong Ting actually refers to two mountains known as Dong Shan (East) seated on the eastern edge of the lake and Xi Shan (West) which sits on an island within Tai Hu. The taste and aroma varies between Bi Luo Chun harvested from these two mountains. Dong Shan Bi Luo Chun has darker and bigger leaves with a rich taste. Xi Shan Bi Luo Chun has small, tender leaves with a gentle taste. We selected the highest grade of Bi Luo Chun from Xi Shan because of its unique fruit-like character that derives from the influence of the many fruit trees that grow on the island. The fruit trees provide shade for the tea bushes and bloom in the springtime when Bi Luo Chun is being picked. This results in a mildly sweet flavor and fruity aroma being transferred into the freshly picked tea. For more on the lake that Bi Luo Chun hails from and the tea itself, we have a video that expounds more on this tea.

Bi Luo Chun is one of the earliest picked green teas. It is normally plucked near the end of March while the weather is still cold. Tea pickers will dress in winter clothes wearing gloves with the fingertips removed so they can still effectively pick leaves. Mr. Lu is more often than not roaming around with his tea picking staff early in the morning to ensure the proper timing and quality for every picking. He will instruct them to closely inspect each individual bud waiting for the idea time, when the first leaf barely begins to separate from the full sized bud. Mr. Lu collects all of the fresh leaves from the tea pickers when they return for lunch at his house. He will then gently lay the fresh leaves along bamboo trays to allow them to dry for one to two hours, depending on the moisture in the air. While the tea is breathing he will prepare his wok for frying. Once the tea leaves have the appropriate flexibility to the buds, without them being so crisp they snap the tea leaves are ready to be fried.

Mr. Lu will spend the better portion of his day frying tea leaves. First he will use a very high temperature in the wok to fry the tea leaves and destroy the enzymes and preventing oxidation, then he will lower the temperature to continue frying while working one handful of leaves at a time into their proper shape, repeating the hand rolling step until the tea leaves are nearly dry while adjusting the temperature. There are only about 300 grams of tea leaves per frying session in the wok at one time. After the tea leaves are their curled shape he will give the leaves time to rest before returning them to the wok for the final frying to bring the tea leaves to their desired moisture. Later in the evening, after all of the fresh tea has been fried Mr. Lu will bag the fried leaves in local paper before putting the packages in plastic bags; they will then be stored in tin buckets containing limestone along the bottom which will help absorb excess moisture.

According to the Traditional Chinese Medicine (TCM) and modern pharmacology, Bi Luo Chun Green Tea contains a mount of compounds that are conducive to health, including Vitamin C, vitamin A, caffeine, flavanols, catechins and etc. Bi Luo Chun has many health benefits for people of all ages:

>> Similar to other green teas, Bi Luo Chun has a strong effect of losing weight, due to the substances including folic acid, catechins and caffeine that are responsible for fat-burning.

>> it can also help to ease bronchial spasm, promote blood circulation, and is a good supplement in the treatment of bronchial asthma, myocardial infarction.

Q1: Are you a trading company or a manufacturer

A1: Yes,we are manufacturer,We have own tea farms and factory, and we are also a trader and had export license.

Q2: So many tea and types, how can I distinguish from them and pick up our target tea?

A2:You could tell us about tea function, taste or any else, we will help you out of your questions and provide good solution to you.